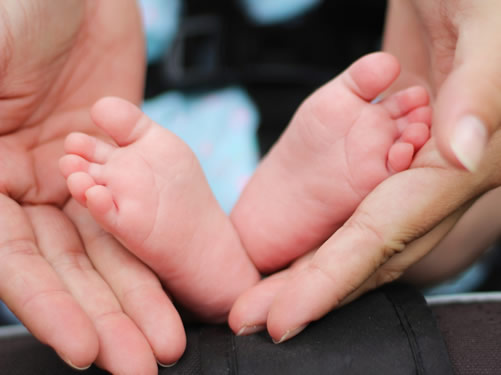 I first met Jane approximately 15 years ago after a recommendation from a friend who had been suffering from polycystic ovaries and had had a successful pregnancy following their reflexology treatment with Jane. After a few weeks of seeing Jane I became pregnant and had my beautiful daughter, but my story with Jane wasn’t to end there. Unfortunately my first marriage wasn’t meant to be and I ended up being on my own with my daughter for 8 years, until I met my lovely partner.

After a couple of years of being together we both knew that we wanted to share the unique bond of being parents together. My age at that time was 39, so we knew that we were perhaps not going to achieve our dream, but nothing would stop us from trying. I fell pregnant quite easily but we suffered a miscarriage at 3 months, to be told that the reason was probably my raised maternal age. We were both devastated and I felt that my body have failed me miserably. We were both still very determined though, but after falling pregnant for a second time I suffered another miscarriage at 11 weeks. Our hearts were broken and the pain was indescribable and at that point, having been told again my age was probably the significant factor, I was beginning to lose all hope.

Emotionally and physically battered I called Jane. Within 8 weeks of treatment I was pregnant again and at the age of 41 I had a beautiful baby boy –  who is now two and half. My little boy brought us so much joy that when he was just over one year, I went to see Jane. I was 42 and within just 4 weeks of treatment – Jane and her amazing hands helped me fall pregnant once again.

So at the age of 43 this year and only a few months ago my second beautiful daughter was born, 14 years after Jane helped with my first.

We are eternally grateful to her, and her healing hands.