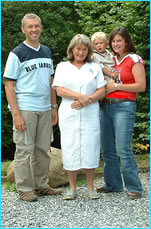 I had been trying to conceive for three years. I’d taken the fertility drug Clomaphine for six months because I was not ovulating but still didn’t become pregnant.

I heard about Jane and reflexology and embarked on a course of treatment. On 28th November, three days after my period was due, and after only six sessions of reflexology, I discovered that I was pregnant.

I could not believe the positive effect that reflexology had on my body and obviously what drugs and time could not do, reflexology did!….